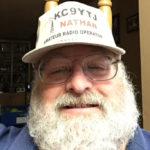 Mr. Brindle is a software engineer of a certain age and girth.  He can do nothing about the former, but is attempting to do something about the latter.  He is happily married to his lady Sally, with whom he has two cats and several children of other parents, one of whom has graced him with two grandchildren upon whom he dotes.  His educational background is in History, mostly American with a side of Japanese.

He is a Freemason of long standing; Master Mason, Past Master of his lodge, a Knight Templar in the York Rite of Freemasonry, and a 33° Sovereign Grand Inspector General and Honorary Member of the Supreme Council, 33°, of the Ancient Accepted Scottish Rite of Freemasonry for the Northern Masonic Jurisdiction of the United States of America.  As if that were not cool and sublime enough, he once held the single most badass title in Freemasonry:  Thrice Potent Master of the Lodge of Perfection, 14°.  And he has been Secretary of more Masonic bodies and organizations than any sane man should ever aspire to become.  Including this one.

He is also a licensed amateur radio operator, Amateur Extra Class, and only wishes he had a broken 6-meter amplifier that could project mini-singularities.

Anyway, that’s what he does when he’s not working, writing, honey-dewing, or playing with his grandchildren.