It’s not about Jeff Bezos being a rich commie, or about him suddenly discovering that mail-in balloting is rife with possibilities for error and fraud.  It’s about Amazon Logistics and their crowd-sourced delivery scheme, and some weird shit that seems to be going on with their print-on-demand service.  But also about what they think is important and what isn’t.

As those of you who know me know (and if you’re reading this blog, of course you know), I dabble a bit in Science Fiction.  We take this moment for self-promotion (as if this whole blog isn’t about self-promotion): 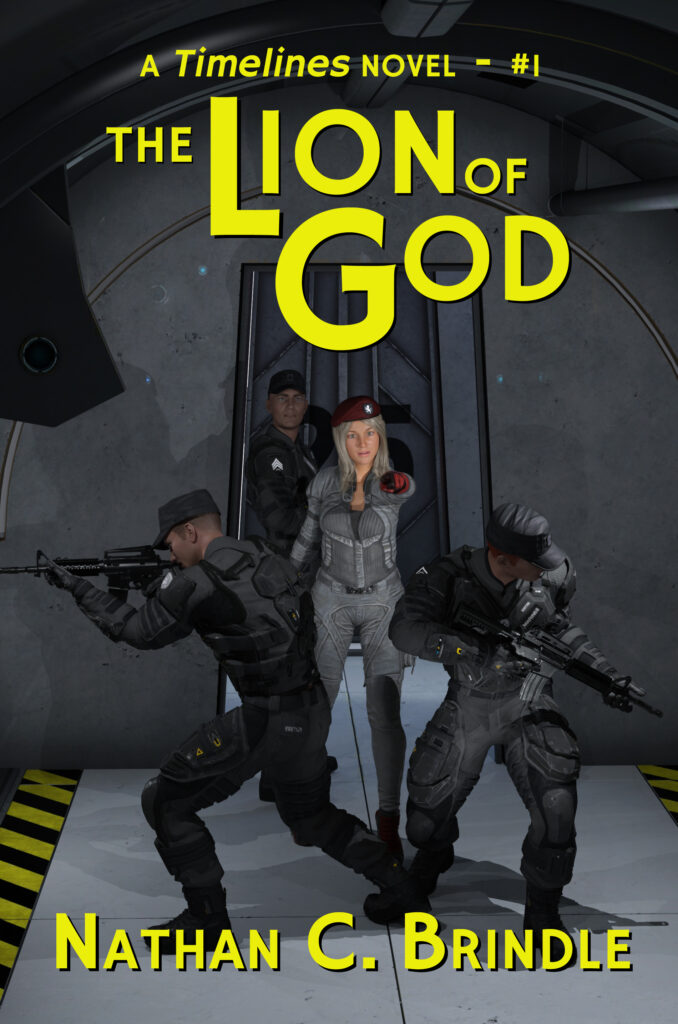 I published this novel as a Kindle e-book last July, but because of time constraints and issues with putting it together, I didn’t create a paperback edition at the same time.  I finished the paperback edition in December, uploaded it, ordered a proof copy, fixed some issues I found in the proof, re-uploaded, and let it go live.  It’s sold two copies.  Which is not a big deal because I make only 34 cents/copy in royalties for the paperback vs. $2.03 for e-books.  So definitely buy the e-book.  Or read it on Kindle Unlimited; I get a fraction of a cent for every page you read on KU, so I’m good with that.

Bottom line, the paperback, for me, is mainly a vanity issue.

Amazon will sell authors as many copies of their print-on-demand books as they want, at Amazon’s cost.  (Well, within reason; there’s an upper limit and I don’t recall what it is, but I’m way, way south of it.)  In my case, that’s $4.44 per copy.  Plus $1.11 shipping, even though I’m a Prime member (which is another nitpick).  So that’s $5.55.  Which means if I sell them at the cover price of $7.97 (plus s&h if I have to mail them), I actually make $2.43 — a little more than I get for the e-books.  So yeah, if you want a print copy, and you want me to autograph it, please don’t order it from Amazon – email me or message me (I’m on MeWe and Signal) and we’ll work something out.

So I ordered ten author copies on December 31, so I’d have some available to autograph for people who’ve said they want autographed copies.  (Yes, there are a few of them out there.)

Second (big) nit:  They charged my card on the 20th for the entire 10 copies.  I’ll get to why I’m annoyed at that in a moment.

Third (big) nit:  They delivered one copy before we woke up this morning.  The other nine copies are currently in limbo somewhere between the printer and us.  This is the reason for nit #2.  Where are the rest of my copies?  Still in Monee, IL, for all I know, and possibly not even printed yet.  But still, supposed to be here by 10PM today!  Pardon me while I snort, politely. 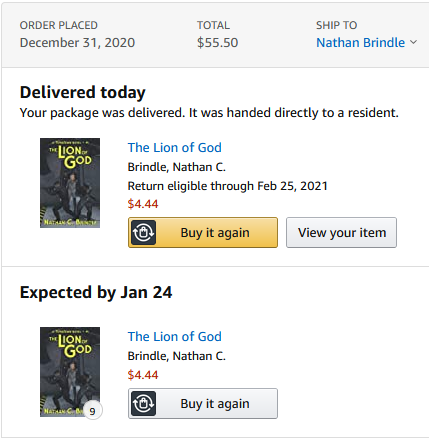 Fourth (medium) nit:  The Amazon Logistics driver left the package in our mailbox at 7:57AM (I didn’t even roll out of bed till nearly 9AM; it’s Sunday), then had the balls to report “Your package was delivered.  It was handed directly to a resident.”

Fifth (small) nit:  Amazon drivers are not authorized to leave packages in USPS mailboxes.  It is in fact a federal crime for anyone but the USPS or the resident to place items in the box.  But Amazon drivers do it all the time, anyway.  I guess that beats leaving it sitting on the driveway in the snow.  (Why, yes, one driver did that once.  Another driver left a (paper, not Tyvek) envelope on the uncovered part of the porch in the rain.  Luckily it was one of those heavy, almost waxy brown paper envelopes, so the inside was perfectly dry.)

So now WTF are they going to do?  Dribble the rest of the books out to me, onesee-twosee?  That’s pretty poor service, regardless of how small a fish I am in their great big author pool.

Anyway, it looks like I’m finally going to have a few copies to autograph and mail, so there’s that.

EDIT, 25 Jan 2021:  They finally got here this morning.  And were left just off the porch, in the dirt, behind a bush, where they would have gotten soaked had I not seen them and brought them inside before the rain hit.  Sigh.  And apparently packed by a group of mentally-deficient chimpanzees, but thankfully undamaged.