I have not one, but two books (a novel and a novella) nearly ready for the ceremonial pushing of the “Publish” button. 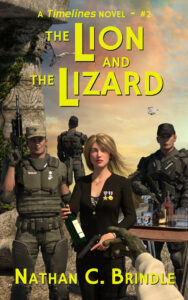 First, the long-awaited (by me, anyway, because I had to sweat blood to get this one done, but it was worth it) sequel novel to The Lion of God:  The Lion and the Lizard.

Thirty years ago, Dr. Ariela Rivers Wolff, M.D., Ph.D., AKA The Lion of God, had a pretty exhausting week.

Her world was invaded by time-traveling soldiers, she was nearly turned into human toothpaste by an experimental dimension jumper when she went to find her parallel “Dad,” who just happens to be able to borrow a Space Force fleet to come and take out her world’s invaders . . . and then she found out she was considered by those same invaders to be a saint in their odd religion, and one of the targets of their invasion.  If that wasn’t enough, she nearly fell completely out of the universe into a time rift, being saved only by the skin of her teeth by her parallel “Dad”.

After all that, learning she was going to be the one to bring universal healing and long life to the human race in her particular timeline was just the icing on the proverbial cake.

Anybody else would go home, turn off their phone, pull all the blinds, lock all the doors, and take the rest of their life off.  But Ari isn’t “anybody else”.  And her cult of admirers across two timelines won’t take “nobody home” for an answer.

Fast-forward thirty years.  Scientists have detected radio transmissions in an unknown language from several hundred light years away.  And now she’s been asked to use her special “saintly” skills as demonstrated on her last “mission” to make first contact with whoever they are.

And that’s only the beginning.

Looks like Ambassador Dr. Ariela Rivers Wolff, M.D., Ph.D., is going to have another pretty exhausting week.  Or six.

This book really needs to be read before the novella A Fox in the Henhouse.  Mea culpa; I finished Fox way back in December and didn’t feel like waiting on The Lion and the Lizard, which at the time was in the throes of writer’s block.  BUT, as a bonus for those who may have been scratching their heads over stuff I wrote in Fox, you now have its sequel, to wit: 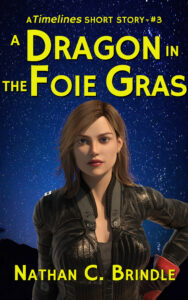 A Dragon in the Foie Gras is a novella, the next story in the continuing saga of Captain Delaney Wolff Fox (the daughter of Ariela Rivers Wolff, the Lion of God; you may have heard of her).  And it should definitely not be read until after you read The Lion and The Lizard.

Captain Delaney Wolff Fox is back.

She’s just led her team on a months-long hunt through the penal world al-Saḥra’ (known otherwise by its semi-satirical name “Sanddoom”), looking for an industrial-sized illegal drug “kitchen” that’s been supplying colony worlds with various illegal substances via a network of involuntary migrant “mules”.  That hunt ended satisfactorily, and rather explosively, with the destruction of the “kitchen” and hundreds if not thousands of personnel associated with it.

Now the team is heading back to Earth, hoping for some well-deserved shore leave . . .

. . . but it’s not to be.  A long-sleeping foreign agent has been found in a stasis chamber in an abandoned Chicago warehouse, and it’s up to Delaney and crew to investigate the mystery, by traveling back to the year 2017 to find out why the agent was placed in stasis then, and why the stasis seems originally to have been planned to end in late 2020.

And when the sleeper wakes, asks for and consumes an entire pound of goose liver pâté, and asks for more, it’s pretty obvious they’ve got

A Dragon In The Foie Gras