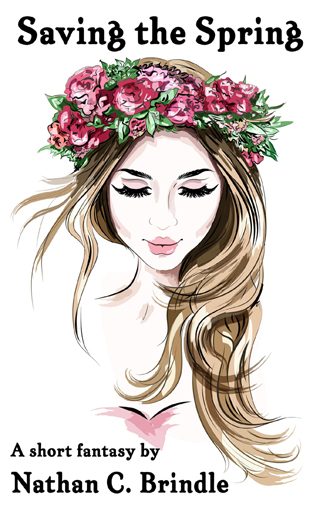 Still working on The Lion of God, but I wrote a short — ca. 10K words — fantasy story over the last week that I called “Saving the Spring”.  I decided “what the hell” and am getting ready to put it up on Amazon as my first published work of fiction.

Jack Randall knew immediately something was off when he pulled up to the old roadhouse.

Little did he know that crossing paths that night with the establishment’s beautiful bartender and her handsomely-rugged boyfriend/cook would lead to him recalling his former life as a god – or fighting a rematch with the god who had stolen his memories.

Now, look…fantasy is not my métier, by any stretch of the imagination.  I’ve never spent a lot of time reading it, and certainly never entertained any notion of writing it.  I’m usually too hard-headed to enjoy stories about magic.  There are exceptions, but not many.

This story was a dream I had about a week and a half ago.  It was fairly detailed and stayed with me after I woke up, which is rare, so I decided I needed to write it down.  I have no idea if it’s good, bad, or indifferent; but it will be up on Amazon (Kindle only) for 99 cents and available for Kindle Unlimited in a few days (and may be free for a couple of weeks, if I can figure out how to do that).  I’m not quite ready to punch “publish”, but when I am, I will post a link here.

My wife, who when I told her it was not science-fiction, decided she would read it, said “I didn’t hate it” when she finished.  Well, we don’t have the same taste in books (her taste normally runs either to romance “fluff” that she can read and fall asleep to, or mystery authors like James Patterson and so forth that keep her up all night).  So I’ll take “I didn’t hate it” as a win.

EDITS:  I changed this because I decided to put the story in KDP Select, which allows Kindle Unlimited users to download it “free” as a KU book.  “Free” because a) you pay the monthly fee to Amazon and b) you can only have 10 KU books checked out at a time, so at some point you will probably return the book and get something else.  KU is, obviously, not purchasing the book to keep it.  If you do want to keep it, you pay $0.99 and it’s yours forever, notwithstanding Amazon unilaterally changing their terms, but that’s between readers and Amazon.   As far as “free” goes, KDP Select does have the free promotion option, so at some point it may well be “on sale” for a few days for free.

Last night when I wrote the above edits, I was under the mistaken impression that KDP Select required you to be in the 70% royalty tier which bottoms out at the $2.99 price point.  I really didn’t want to sell the thing for $2.99.  It’s not long enough, and quite possibly not good enough.  So I did some checking around with the KDP setup tools and discovered that you could do KDP Select with a book at less than $2.99.  Since KDP Select includes all the goodies like KU and free promotions, I really didn’t want to miss out on that.  So unless something else rears its ugly head and it turns out I am STILL wrong, the story will be 99 cents when I finally hit “publish”.