Seasons is a series of short stories centered around four Asgardian gods who, since Ragnarök, and at Odin’s behest, have controlled the passage of the seasons in Midgard (Earth).

These gods — two pairs of married couples, one pair who were married long before Ragnarök, and another pair who are somewhat mismatched (one being a Frost Giant and the other being a retired Valkyrie) — settled on Earth thousands of years ago, and took on human personas, which they each assume during the nine months of the year for which they aren’t responsible.

Our series opens in modern times; but to say more would be to give away the plot. 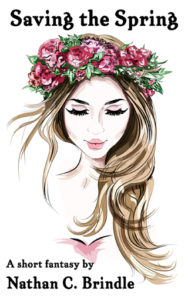 The author says:  Seasons was never intended to be a series, but the characters from Saving the Spring had other ideas.  They’ve interrupted the writing of two unrelated SF novels to date and forced me to write their stories, instead.  That said, they’re fun to write.  I envision the series comprising four longish short stories, one for each season, which will eventually be bundled into a collection and possibly offered in trade paperback form.

New readers should be aware that I have taken a very liberal approach to my reading of Nordic myth, which may annoy some people who either have done deep research into Scandinavian history and mythology, or who are ardent fans of the Marvel Cinematic Universe.  Or both, I suppose, but my dear G-d, the cognitive dissonance such people must deal with. . . .  At any rate, as I say in the afterwords to both of the stories written so far, anyone who’s annoyed that I haven’t stuck to canon (either canon) needs to relax and get over it.  It’s just a story.  And I’ve chosen to assume the Ragnarök of human myth is simply a corrupted version of the “true” course of events as suggested by my stories in this series.

The funny thing is, I know a few modern pagans pretty well, and I imagine they would simply laugh most of this off as a good tale, just not canon so far as they were concerned.  Ah well.